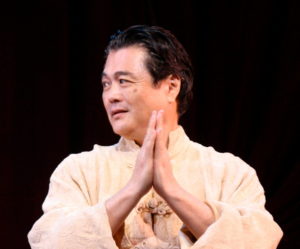 David Mura has written two memoirs, Turning Japanese: Memoirs of a Sansei, and Where the Body Meets Memory: An Odyssey of Race, Identity and Sexuality. His novel about the son of a No-No Boy is Famous Suicides of the Japanese Empire. He has also written four books of poetry, including The Last Incantations.

David’s latest book is A Stranger’s Journey: Race, Identity and Narrative Craft in Writing. His website is www.davidmura.com

In 2010, I was chosen to play the King in a local Minnesota production of “The King and I.” I had acted before, mainly in performance pieces I had written or co-written with others, and as a writer who constantly presents his work to audiences, I was a practiced and accomplished public speaker.

But this was a classic Broadway musical and I was the lead. And I had never had any formal training as an actor.

So, before the rehearsals started, I took an acting workshop at Theater Mu, the local Asian American theater. The instructor, Randy Reyes, devised this exercise where we would go to the local mall and observe someone walking through the mall and then come back and imitate their body movements. I first chose an older Somali woman, but she quickly entered a beauty salon and so I had to make another choice. I then saw a group of young white men, not big enough to be football players but bigger than normal; I thought they might be baseball teammates. I saw that they walked with arms outspread, chests forward, in long loping strides, taking up as much space as they could. They moved through the mall as if they owned the mall.

Back at the workshop, I realized that I walked through the mall with a slight crouch, hunched over as if always on guard, always wary of where some attack or challenge might be directed my way. As if I were an alien presence. As with many people of color in America, my first concern, which emanated from my body posture, was safety, protection; both consciously and unconsciously, I felt I had to be attuned to any potential negative forces around me.

With the help of Randy, I realized I couldn’t play the King of Siam with my normal body posture or movement. I had to stand and move and enter my body in a new way; I had to believe not just that I could be the king of a country, but I was the King of my country. I should not just project power and strength but embody power and strength. I had to imagine a country where my body had never been invisible or marginalized, where I was always destined to be King. Similarly, to play the king, I had to improve my vocal projection, to breathe in and out from the bottom of my diaphragm, to speak from deep in my core.

The cast of The King and I was large, indeed like a small village. There were the wives of the king, his attendants, children of all ages. It was bracing to be part of such a group of Asian Americans. At the opening we received a standing ovation, and we played to full houses and standing ovations throughout the run. (In an odd connection, my cousin, the singer and actor Paul Nakauchi, has played the King in a London and a traveling production of The King and I; so I’m pretty sure we’re the only Japanese/Asian American family with two members who have played that role.)

There are times still when I lose the King’s sense of strength and power and relationship to my body. But I have known it; I have enacted it on stage before crowds of several hundred. I have taken over the stage and owned my body. So I do know now how that feels.

My friend, the Korean American actor Sun Mee Chomet, tells me that when she teaches women, especially Asian American women, to breathe and project properly, from the core of their body, and these women feel the power emitting from their voice and body, they often break down weeping. So many repressed emotions are stored within the core of our bodies, and in getting in touch with this core and the voice it produces, these emotions are released; the women feel then a strength that they did not know existed within them. One implication of this: Asian American students can benefit from training in theater and the arts, and such training can be extremely helpful and just as essential as any academic training to their becoming leaders or moving up whatever ladder they are trying to climb. Just as importantly, our own psychic health as Asian Americans is influenced by how we inhabit our bodies, and if it helps us, we all have the ability to change how we do that.