I Didn’t Understand My Book Until After I Sold It

Eleven years ago, I started a novel about expatriates in Prague. I was an expatriate in Prague, a Korean adoptee teaching English as a Foreign Language to executives at Czech companies. It was my first year out of college. I wrote a Pynchonian cast with a white American kid at the center. A political novel about the effects of American culture on Eastern Europe.

The year afterward, I went to Korea for the first time. I told myself I didn’t care to know anything about my birth family. I told myself I was simply curious. I started dating a woman who would become my wife. After that year, we dated long-distance while I did an MFA at Emerson College, in Boston, with the idea that I would do a little tinkering and publish my masterpiece.

Of course, my book was no good. I spent my MFA combining my Anglo American protagonist with his Asian American friend, setting the book back in time to 2002 when a major flood devastated Prague, and finding a consistent style. The other big thing I did was start therapy. I wasn’t talking about my adoption yet, but my protagonist became adopted.

Then I took a year off to go back to Korea and get married, and I lost my job there for missing work on Christmas, the best thing that could have happened to me. I started the book over, writing five or six hours a day. My protagonist was now thinking back on Prague from a hospital, dreaming about a ghost woman. I submitted that draft as my MFA thesis—it finally had the title The Hundred-Year Flood—and revised for two years afterward. I found my first agent and revised with her suggestions. At the same time my daughter was born, my agent sent the book out to publishers. I had written well over a thousand pages to get two hundred I almost liked.

The rejections rolled in. When I returned to the page yet again, I couldn’t seem to face the book I’d written. I ran into depression, mostly related to my changing worldview. I was a new father, and part of fathering a biological child meant facing how much my birth culture and birth family mattered. For one, I didn’t know what to tell the pediatrician about my medical history, what diseases my daughter might chance facing. In my writing, I started exploring my protagonist’s Korean side. After another couple of years, I found a new agent who sent the novel out again.

Finally, after a decade of working on the book, a decade after I lived in Prague, I got my break. It started with a trip back to the City of Spires. I led a writing trip to the Czech Republic and as if it was a magic charm, soon after that trip an editor asked to see a revision of my first three chapters. I rethought who my protagonist was after ten years of living with him. He was different from who he’d started out as, but he wasn’t right yet. I kept revising. My editor bought The Hundred-Year Flood on the promise of further revisions.

Almost as soon as I sold the book, I realized that other people would read it. I had been working on in private for so long. Of course I had hoped for this, but now it was real. That reality took the book out of a safe space, a silent space. I had to answer, publicly, the question of what really haunted my protagonist.

In the middle of my edits, I went to a football game with a mentor. He said he had sold a novel about the one-who-got-away. During his own final edits, he asked himself if he really was still hung up on his ex. The question made him realize that the love story at the center of his book was a father-daughter relationship. It was a book about the writer’s love for his kids. That was the love that mattered to him now.

I thought hard about what he had told me. He had done a kind of self-therapy. I knew that some aspect of my own novel had always been off. If other people were going to judge me by this book, I had to judge myself. All of the stuff about Korea, about haunting, about myth—what was that? I had thought my book was about the loneliness and confusion I had felt in Prague as an Asian American expatriate. I had gone through draft after draft trying to get close to my protagonist. What I was missing, though, was what I had been denying in Prague and what had made me leave for Korea directly afterward.

In other words, it took me until my final revision to see that I was writing a sort of love letter to my birth mother. I started the novel before I ever returned to Korea, before I married a Korean woman, before I admitted to myself that I thought about Korea at all. Eleven years earlier, when I went to Prague because I was too scared to go to Korea, I started a novel that was always about connecting with my roots and my inability to do so. If the book is about loneliness and confusion, it is about the loneliness and confusion of adoption. I needed eleven years of self-therapy, of revising my words and my identity, to see that I had been writing about my own past all along. 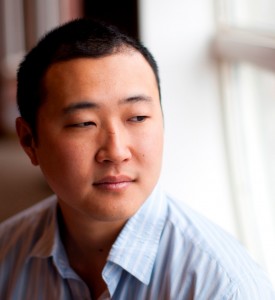 Matthew Salesses was adopted from Korea. He has written about adoption and race for NPR Code Switch, the New York Times Motherlode blog, and Salon, and his fiction has appeared in PEN/Guernica, Glimmer Train, American Short Fiction, and Where Are You From: An Anthology of Asian American Writing, among others. He is also the author of I’m Not Saying, I’m Just Saying and Different Racisms: On Stereotypes, the Individual, and Asian American Masculinity. The Hundred-Year Flood is his first full-length novel. 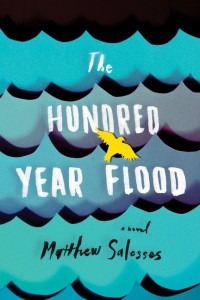 “This is an exquisite, unforgettable book about the extraordinary demands of identity and the transformative power of art and love.” 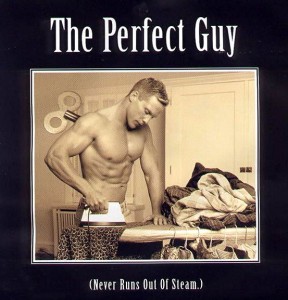 Sapna Cheryan and Zach Katagiri, two of our Anthology authors, recently published an article in Social Psychology about the ways that people cope when they feel that a core part of their identity has been threatened. The article focuses on masculinity (What happens when you tell a man that he is not “manly”?) and has been generating some interesting media buzz, subsequently getting coverage at an assortment of notable news organizations including Salon, UK Daily Mail, and MTV.com.

Their study was inspired, in part, by earlier work that looked at the ways that Asian Americans would assert their American identities in situations where they were subtextually sent back to Asia (i.e. “Where are you from?… Yeah, yeah, but where are you really from?”). The authors were hoping to support that work while taking a look at another example of identity threat/assertion as a way of opening up dialogue about the social norms and expectations that we perpetuate, often without even thinking about it, and the implications such things can have in both humorous (men who are told they are weak report being taller than they are and having had more sexual partners) and very serious ways (men with baby faces tend to have more aggressive tendencies and commit more crimes).

Sapna Cheryan is an assistant professor of psychology at the University of Washington. Her research interests include identity, stereotypes, and prejudice, and she has published articles on stereotype threat and strategies of belonging to social groups in journals such as the Journal of Personality & Social Psychology and Psychological Science. Her awards include the National Science Foundation CAREER Award and the American Psychological Association Dissertation Research Award. She received her Ph.D. in social psychology from Stanford University in 2007.

Zach Katagiri was born in Hawaii, grew up in Oregon, studied in California and Kyoto, Japan, and now lives in New York. He has been working in digital media for the past 15 years, doing audio and video production, graphic design, and web design and development (http://www.zachkatagiri.com). His primary gig is as the US Business Director at CMNTY (pronounced “Community”), managing digital marketing efforts, helping to support clients, and establishing their New York City office. He and his wife live on the Upper West Side of Manhattan and love to cook/eat/drink, play/watch basketball, and take advantage of a city that has something different to do every day.

“Where Are You From?: An Anthology of Asian American Writing (Volume 1)” was honored as one of five Finalists for the “Best Self-Published Book of 2012″ award by Shelf Unbound magazine. It was also recommended as one of Greater Boston’s Best Book Picks of 2012: Click here to read it!
You can purchase your own copy of the book from Amazon.com. It is available both as a book and for the kindle.
If you’re interested in joining the AsianAmericanWriting listserve, please contact us at info at asianamericanwriting dot com.  Thanks for visiting!

What does it mean to be an Asian American in the twenty-first century? In mainstream America, cliched stereotypes about Asian people as model minorities, asexual techno-geeks, hypersexual dragon ladies, perpetual foreigners, or Yellow Peril “threats” continue to persist — though they are frequently concealed behind politically correct slogans like colorblindness and diversity. Where Are You From?: An Anthology of Asian American Writing challenges these viewpoints.
The writings and art in this anthology envision Asian American identity, culture, and politics on our own terms, through our own experiences and unique perspectives. Incorporating a diverse range of personal essays, stories, critical articles, poems, art, and other work, this anthology seeks to express the truth of our lived realities and to give voice to an Asian America that is frequently marginalized by society. The very title of our book — Where Are You From? — questions the common prejudice often expressed by the majority culture that Asian Americans are alien or foreign to the USA. In the words of Lawson Inada, we want to tell people where we come from — where we’re really from.
Other contributors include Professor Darrell Y. Hamamoto, Andrew Lam, Lee Tonouchi, Matthew Salesses, Curtis Choy, Polo Catalani, Tony Robles, Dmae Roberts, Valerie Katagiri, Sapna Cheryan, Roberta May Wong, Beth Kaufka, Marivi Soliven Blanco, Robert Francis Flor, Michael Lai, Min K Kang, Byron Wong, Zach Katagiri, Larry Yu, Sonia Sarkar, Simon Tam, Ben Efsanem, Koh Mo Il, Victoria Yee, Diem Tran, Luan Nguyen, Souttalith Vongsamphanhn, Bikash Khada, Mary Niang, Ngoc Minh Tran.