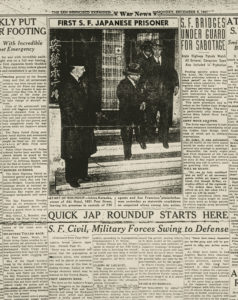 The Inspiration Behind the Award-Winning Documentary

One of life’s simple pleasures when I was a kid was leafing through old family photo albums. The weather was often grey and gloomy in San Francisco’s Richmond District, being close to the bay as the fog rolled in, so I would often grab a few albums and find a cozy spot on the living room carpet next to the fake log fire and transport myself to another time. I always loved seeing those old deckle-edged black and white photographs of my mom and dad, my relatives and especially my sister and brother caught in a candid moment or just clowning around. By then, there were color photos, but the years had given them an antiquated patina, adding a nostalgic effect, which your iPhone’s camera filters can only attempt to duplicate. In this digital age, I find it sad that kids these days won’t know the simple pleasure of gathering around old albums.

Photos that predate the ‘50s are particularly interesting to me. I often had no idea who these Japanese immigrants were, but they always looked so dignified in their stoic poses and they always seemed to be dressed in black three-piece suits like they were going somewhere important. They would often pose in front of a big black car, which I’m told was seldom their own. The suits could very well have been navy blue or Prince purple, but in black and white photos, your mind has to make the choice. I chose blacks and greys. I would ask my mom about them. “Who are these people?” Most of the time, she wouldn’t even know.

I must have been around fourteen when I came across an article neatly cut out of the San Francisco Examiner’s front page. I remember my mom telling me something about her father being “the first to be taken away,” but here was a yellowing piece of actual proof. In the masthead, it read, “Monday, December 8, 1941.” The headline read, “First S.F. Japanese Prisoner,” and there was a picture of my grandfather, Ichiro Kataoka, being escorted in handcuffs down the front steps of his hotel on Post Street in the heart of San Francisco’s Nihonmachi.

Among all the melancholic, endearing, funny photos was this dark piece of family history that would nag at me through the years. I had to know if my grandpa, who I barely remember since he passed away when I was three years old, was a criminal. You always want to believe that your country is fair and just and that the FBI would only go after the bad guys. My mom was a young girl of fourteen when the Japanese Imperial Air Force sent planes to destroy the US Naval Base in Honolulu at Pearl Harbor, so she had very little understanding of what was happening to her father, and eventually to her mother, herself and her five siblings. What she had to offer as an explanation was this: my grandfather was a businessman who was able to buy a hotel in the Japanese section of the city. In cornering that market, he would often drive out to the docks and greet incoming ships carrying passengers from Japan before the days of air travel. He would introduce himself as the owner of Aki Hotel and make them feel less like strangers in a strange land. It was partly an act of kindness, but it was mostly just smart. As a result of his frequent trips to the ships, bowing to greet new Japanese immigrants, along with his growing prominence in the Japanese community, he was secretly under surveillance.

What I do remember about my grandpa was that he was a small, quiet man. He couldn’t speak English well, so we had little actual conversation. It’s a typical Sansei dilemma. When the FBI cuffed him, he went peacefully to meet whatever fate his new country would impose on him. I’m sure he was scared and had no idea of the magnitude of what would follow for his family and 150,000 other people of Japanese ancestry trying to make America their new home. He was taken first as an example of what would happen to the entire Japanese community in San Francisco.

Flash forward to the early ‘70s. I had moved to Los Angeles to start a career in advertising. My grandfather had been long gone and the days of flipping through photo albums were far behind me. I kept in touch with my family as much as I could and would take frequent trips to San Francisco. On one of those trips, I heard that my cousin, Marjorie, had gotten a job at The Examiner. I didn’t connect the dots until a couple of years later that she might be able to access the microfilm of that newspaper article. I thought it would be great to send it to a color lab, make large framed posters and give them to my relatives on my mother’s side. Marjorie came through for me and in turn, I surprised my family with theatrical poster-sized sepia-toned framed copies. For me, the importance of that piece of family history was mostly personal, a piece of the Kataoka legacy.

Little did I know that my son, Myles, would grow up to become an accomplished filmmaker and use his great-grandfather’s story to create a beautiful, heartfelt and poignant documentary using my mother, one of two surviving children, as the onscreen narrator. Myles had a vision surpassing my own and the ambition and talent to make it happen.

On a personal note, I am thrilled that my grandfather’s story is now immortalized, as well as my mother’s persona. On a more far-reaching note, Myles’ award-winning documentary, “First To Go: The Story of the Kataoka Family,” has been shown in many film festivals across the country this past year, opening the eyes of many Americans who had no idea this injustice had ever happened. Without getting into the ramifications of racial profiling and current immigration tensions, it’s my hope that, in some small way, my son’s film can bolster awareness and ultimately make a difference.

Bio:  Mark Matsuno was born and raised in San Francisco before moving to Los Angeles at the age of twenty to pursue a career in advertising. After a three-year stint at Young & Rubicam West, he started his own graphic design boutique specializing in movie advertising. Currently, he has his own design firm in Glendale, CA. Much of his time is spent on high-profile films such as Jurassic World, Minions and many others. He is the proud father of son, Myles, and daughter, Alyssa.

Mark is also a dedicated fine artist creating paintings of urban landscapes among other subject matter. You can view his art throughout this posting and at markmatsuno.com.