“Dance rock band front man Simon Tam sought to trademark The Slants. His aim was to reappropriate a term long used to disparage a minority group and to render the term a badge of pride. All of us agreed.”

What do people do after they’ve won a landmark Supreme Court case that has essentially derailed their life’s work in the arts? For me, I’ve spent the last two years sharing that story in hopes of inspiring others to become civically engaged and to be more intentional about the kind of art that they’d like to create. 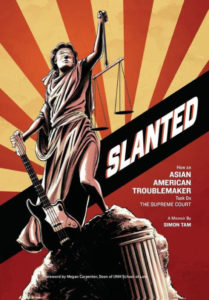 I can’t believe that it’s been a couple of months since my memoir, Slanted: How an Asian American Troublemaker Took on the Supreme Court, was released. Since then, I’ve been traveling across the country presenting this story and engaging in thoughtful conversations with activists throughout the country. This has been especially meaningful because it’s been providing me with an opportunity to share the new nonprofit that I’ve started with others to help provide scholarships and mentoring to Asian American artists who’d like to incorporate community-driven activism into their work.

I’ve always had conflicted feelings about publishing my book. Part of me feels that my story is important and needs to be shared (probably why I travel so far and wide doing so). But another part of me is filled with the seeds of doubt planted by the many publishers and editors who told me that my book wasn’t worth releasing for a number of reasons: there’s no Asian American market, people don’t care, you’re not known enough. One publisher told me, “We already have an Asian writer.” Yes, I did use their critical feedback as further motivation to finish my book … but sometimes that negativity creeps up in those moments of self-doubt.

Recently, I had a live interview on PoliticKing with Larry King and I had an incredible review in the Washington Post that called the book fascinating, compelling, and important. And, there have been other interviews and reviews with NBC News, KOIN News, the Model Majority podcast, the WGN Morning Show, Quartz, and more. Readers have told me how much my story has meant to them. I’ve been able to bridge gaps, especially with those who have misunderstood my work or approached it with misguided assumptions. I’m told more reviews are coming. Does it feel like some vindication for the early feedback I received? In some ways, yes … because, I am truly excited, humbled, and grateful for everything. Whenever anyone wants to interview me for a story or requests a book for review, I’m still pleasantly surprised. According to several book publishers, this book wasn’t supposed to make it. Yet, here we are making it. Changing the landscape. Hopefully changing assumptions about Asian American authors and stories. One review and interview at a time. Showing that our stories matter. Making trouble.

BIO: Simon Tam is an author, musician, activist, and troublemaker. He is best known as the founder and bassist of The Slants, the world’s first and only all-Asian American dance rock band. He is the founder of The Slants Foundation, an organization dedicated to providing scholarships and mentorship to artist-activists of color.

Simon has been a keynote speaker, performer, and presenter at TEDx, SXSW, Comic-Con, The Department of Defense, Stanford University, and over 1,200 events across four continents. He has set a world record by appearing on the TEDx stage 13 times. His work has been highlighted in over 3,000 media features across 150 countries including The Daily Show with Trevor Noah, NPR, BBC, New York Times, and Rolling Stone.

In 2016, Simon joined President Barack Obama, George Takei, Jeremy Lin, and other celebrities in the #ActToChange campaign to fight bullying. He recently helped expand civil liberties through winning a unanimous victory at the Supreme Court of the United States for the landmark case, Matal v. Tam, in 2017.

He has received many accolades for his work, including: “The Mark T. Banner” award from the American Bar Association, the “Hugh M Hefner First Amendment Award,” “Milestone Case of the Year” from Managing IP Magazine, the “Lifetime Achievement Award” from the Ovation Gala, and “Distinguished Alum Award” from Marylhurst University.

In 2019, he published his memoir, Slanted: How an Asian American Troublemaker Took on the Supreme Court. You can purchase it wherever books are sold and read excerpts at www.slantedbook.com