When a guy has had bad luck with women for awhile, he begins to think that he is jinxed. It seemed that every woman I met that I was attracted to was either involved with someone or didn’t like my style. My style back then was Hippie. Never a fashionable high point in the history of style, but I was making a statement about materialism and being a Hippie was part of the idealism that ran through the collegiate universe at that time. It was 1971 and I was living just off campus in a house that I shared with three other loosely associated friends who were like-minded. We all wore our hair long and liked flannel shirts and blue jeans. That year, I wore the same flannel shirt and jeans every day and a lot of my friends would wear the same “outfit” most of the time. I could recognize my friends from a great distance just from their clothing. The comfort of cotton was more important than being fashionable. The more you washed flannel the softer it became. I really loved my blue, white and red plaid shirt. I would wash it once a week and I was good. After a year of wearing it and washing it, the fabric had lost some of its bulk and the colors had slowly washed out so it was getting thin. So thin was it that one of my roommates had put his finger into a small hole and ripped it in half. I went down to JC Penney’s and bought two new flannel shirts the same day.

My persona restored to its former un-capitalistic glory, I was back on the hunt for my Hippie Chick and some of that “free love” that Hippies were supposed to be getting. I was 22 years old at the time and still taking classes at Portland State University. It was summer and the campus was sparsely populated. PSU is a city college with most students living off campus, some at home with their families and some living in student housing. Summer term was lonely for unpaired singles.

I had not outgrown my love for comic books and found that the new generation of “Head Comic books ” was a great source of amusement. Zap Comics, The Furry Freak Brothers and Dr. Atomic comics were a laugh a minute and the exaggerated artwork was accompanied by witty situations and Hippie philosophy. Some of which became quoted by the general college pot-smoking “Heads.” Sayings like “Dope will get you through times of no money better than money will get you through times of no dope.” And common terms and sayings would get mutated by comedians and friends. Second and third generation slang like “Right on” became “Rat on” to be funny. And phrases became contracted like instead of “I got to go home” became ” I gotta.” This counter-cultural shift in English was mirrored in the new comics and a lot of my friends would follow the misadventures of the Furry Freak Brothers as each monthly issue showed up at the local bookstores.

Back to my story. I was looking at the rack for Head Comics at Looking Glass Bookstore when a saw this beautiful woman looking at a copy of R. Crumb’s “Big Ass Comics.” Our eyes met and we smiled at each other briefly. I said “Hi” and she said “Hi” back. Both of us went back to our comics. I would look up occasionally and look at her and she was doing the same. I found a purchase and went to pay for it. I had lost sight of her until I saw her unlocking her bike on the street just outside the side door.

I don’t usually try to meet someone in such a setting but I thought of the old saw “Nothing ventured, nothing gained” and asked her if she’d like to get a snack and she said yes, so we had a bite to eat and got acquainted. She was a Native American from the Warm Springs Tribe. We hit it off like a dream and she told me to come visit her at the Warm Springs Reservation. She had four roommates, but they had a spare bedroom I could stay in. She was so beautiful and I thought to myself that she could pass for an Asian and that would make my family happier (heretofore, I’d been pretty much pairing up with fair-haired women). I wasn’t into astrology but I knew my sign and it was something we could talk about as we were making polite conversation. Then came the stunning discovery that she and I had the same birthday. I had never met anyone that shared the same birthday before, let alone the same birth year. And forty years later I can still say the same thing. The same birthday and year. Her name was Patti. I thought this was a sign – or at least, wanted it to be a sign.

Patti gave me her phone number and address and I told her I would come visit. I had a part-time job and scheduled a week of vacation two weeks out.

I did not have a car back then, so I took a Greyhound bus to Warm Springs and was planning on walking the few miles to Kahneeta, the resort famous for its natural hot springs and campgrounds. This was before all of the casinos at Indian Reservations. As I was walking down the road to the resort, I found that the local people that worked at the resort or lived on the reservation would slow down and ask me if I wanted a ride and even offered to feed me, too. I politely refused them all for the first couple of miles because I hadn’t hitchhiked before and I was uncertain about being picked up by strangers.

Then, a pickup truck with the resort logo on the side stopped and offered, and I accepted the ride. It was August and the heat of the day was getting to me. I mentioned Patti’s name to the driver, and he said he knew her and the “dorm” she shared with four other women. She was the dorm mom it turns out even though she was just a year or two older than her roommates.

Now comes the beginning of the best part of my visit. If this was a movie, this is where the romantically-themed music motif playing in the background suddenly swells and the camera does a close-up shot of two lovers that embrace and kiss for the first time. In reality it was even better than in the movies. As I approached the front door of the house that was called the dorm – I had just walked maybe ten of the forty-foot walkway – the screen door swings open and out shoots Patti running barefoot. And like a woman greeting her soldier-boyfriend who has returned from war, she leaps into my arms and gives me a big kiss right on the mouth. I held on tightly and she held on tightly as I carried her the twenty feet back through the door. I was taken with her beautiful face and slim athletic body. She was very beautiful. A beauty queen.

Our meeting was but an hour total back in Portland, and my memory of her was just a couple of flashbacks in the bookstore and riding away on her bike and looping around me once and saying goodbye. We had talked twice for a bit on the phone just before I got on the bus. I had kept the conversation short cause long distance rates were high for a student. I just wanted to make sure she was still interested in having me visit. The greeting told me that she did. Wow! Even though she had come through the door running, it all seemed like slow motion.

For the next four days we were inseparable. Eating, sleeping, exploring the reservation and visiting her friends. We went everywhere holding hands. All of her friends noted our closeness, and we were happily received by everyone. It was a dream visit with nonstop affection and fellowship with this Native American beauty. I could see a future with her. I was young enough to be adaptable to the idea of living at the “Res” after I finished my last five semesters of college. I had to leave but promised to come back as soon as I could.

When I got back to Portland, I was able to schedule a four-day visit two weeks later. I could hardly wait to see her again. I took the early bus to Madras and got off at the Warm Springs Junction and got a ride right away from an old “Caddy” convertible with two women in the front bench seat. It was just after noon when I arrived at the dorm. I knocked and one of the girls answered the door and said that Patti had left a couple of hours ago, but they were expecting her back soon. I was hungry. Hadn’t had breakfast so I went down to the cafeteria for a snack while I waited. Just as I got to the parking lot, I saw her walking out of the cafeteria with this other guy. A scruffy unshaven fellow wearing a leather range-rider type jacket. She was close by his side as they walked over to a Porsche 911 sports car. As he got behind the wheel, Patti came over to greet me by giving me a hug and said, “This is not a good time.” Then, gets into the passenger seat of the Porsche and off they go.  Damn … the curse had struck again. After I ate a cheeseburger basket in the cafeteria, I went back to Portland the same day.

Back in Portland, Patti and I talked briefly on the phone. By the hushed tone of her voice, I guessed her boyfriend was in the next room. He was her ex-lover and he wanted another chance, and she was going to give him one more. I thought to myself, Porsche 911 vs Strawberry Racing Cycle Professional racing bicycle. I didn’t need my three terms of Calculus to do the math … . 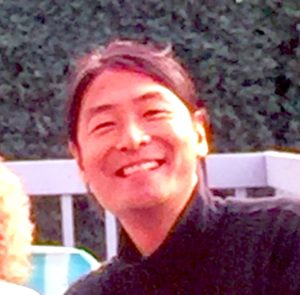