Contributed by special guest writer, Robin Ye, as part of our collaboration with APANO (see organization description at end of this blog) 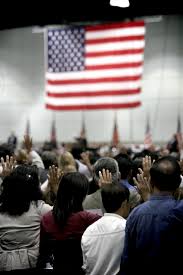 One summer, I had the privilege of observing U.S. Naturalization ceremonies as part of my work with the New Americans Voter Project, an APANO co-sponsored program. On the blistering August day at the U.S. Citizenship and Immigration Services building at NW 14th and Overton (Portland, OR), I was in a room full of 33 immigrants from 17 different countries. They had already been woven into the American and Oregon fabric but now chose to affirm their status as “U.S. citizens” under the eyes of the law and government.

Normally, a naturalization ceremony should be celebrated and inspire awe and pride in this experiment called America. I felt hopeful and inspired by the waving of little American flags as their families waited to capture the special moment for their loved ones. My own Chinese family was naturalized in 2006 (I am the only U.S.-born member of my entire lineage) and it was an exciting moment for us all. But what I felt in addition, as I watched the recent ceremony, were feelings of tension, sadness, and internal conflict – conflict that hadn’t previously existed.

I used to be unequivocally proud to be American. Chalk it up to naiveté, or maybe idealized belief that our best times are still ahead of us, but I truly believed that despite America’s imperfections, there was endless possibility in America, in its diversity, in what its diversity could accomplish in our democracy. I believed that diversity was embraced – was our destiny, our greatest strength to be cherished, not disdained.

Lately, however, it hurts my heart that the more I learn about my country, the more I grapple with the underlying question: Am I proud to be an American? Afterall, my Chinese parents would not be where they are now without the kindness they found in Huntsville, Alabama upon immigrating in 1992. How much credit can I give to a country who helped my uncle emigrate from China to Canada in 2014, inspired by the society he saw on an academic exchange in Rolla, Missouri?

If my pride is based on how inclusive and accepting my country is, is not the fundamental question then: “Is America a welcoming place?”

For me and many others, the results of the 2016 elections shocked the moral conscience of America (for some, but not nearly enough) but it was anything but shocking: after all, this is not the first time a misogynistic, racist, homophobic, classist, anti-immigrant tyrant has been elected to the White House. But what hurt the most was that it felt like a rejection of the incredible, diverse people that color my life as well as who I am and what I stand for, too. I was heartbroken. I was hurt in an unspeakable way, a feeling that something once thought unshakeable had been unmasked as something fragile, something delicate. It revealed how little (if at all) our society has grappled with our complicated history and not yet found avenues for being better. It exposed that we have a much longer way to go than we thought.

We are all made to feel like outsiders at some point. In Portland, some of us are even made to feel like outsiders in our own hometowns. I carry the burden of feeling like I represent my race, my ethnicity, my people’s past and present. I’m exhausted. I’m tired of the inane debating over the legitimacy and existence of immigrants, over who gets to be included in society, over the worth of human beings. I’m tired of hearing “well-intentioned” rhetoric denouncing the current hate and vitriol in our society as “Un-American” or somehow against American values and principles, as if our country’s history isn’t rife with examples of unwavering hate. The good does not wash away the bad and vice versa. But xenophobia and prejudice is as American as America can get. 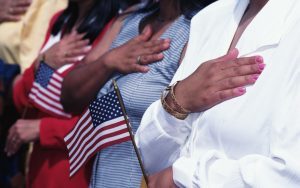 For those in the ceremony, to what set of responsibilities, histories, and privileges did these New Americans just swear an oath of allegiance? As I sat there nervously clapping, did it pain other Americans as much as it did me that these immigrants were pledging support to a government that does not want them? I’m sure the immigrants were aware of this complicated dilemma – is there not something inherently progressive and accepting about immigrants who leave behind their lives and culture to adopt new ones in the U.S.? Are immigrants not the most accepting and understanding people of other peoples and cultures, the most realistic and sober-minded when it comes to the challenges and hardships that accompany dreams of a better life?

At the end of the day, these New Americans were smiling and proud of their accomplishment. They announced their name to the audience, their origin countries, and, if so inspired, gave a remark about what that moment meant for them. Some even registered to vote!

Maybe this tension, this conflict, is a central part of the American experience. America is both a welcoming and unwelcoming place, but we engage and fight in this never-ending struggle for who is included in our society. If America isn’t a welcoming place, then America is a place that doesn’t see the beauty of its multicultural potential. If America is a welcoming place, then diverse identities will be embraced, not merely tolerated. Immigrant Americans would not be half their original culture and half American, or half anything, but twice as much. “Oh you speak with an accent? That’s wonderful! That must mean you speak more than one language.” Being a “New American” means becoming a part of a larger struggle and assuming an even bigger part of the American inheritance. Becoming a New American means taking a rightful space in the political process to shape our nation. If we don’t, then what kind of world will greet future generations? If we do, then what is possible?

In America, future generations will be darker and more beautiful than ever before — what will you do to ensure that they’ll belong?

Robin Ye is the Lead Political Organizer at APANO (Asian Pacific American Network of Oregon). He is Chinese-American and the only member of his entire family born in the United States. Robin grew up in Beaverton, Oregon and attended high school at the International School of Beaverton.

Robin is an organizer by trade and a policy wonk and political junkie at heart. He earned his bachelor’s degree in Public Policy and Human Rights (minor) from the University of Chicago in 2016. He has a passion for civic engagement, social justice and electoral politics.

In his free time, Robin is an avid sports fan and enjoys eating, hiking, cats, podcasts, writing, and comedy.

EPALF IS BACK! Join us for the 2nd Annual East Portland Arts & Literary Festival on October 19-20, 2018 at PCC Southeast, hosted by APANO’s Arts & Media Project. Presented in conjunction with IntersectFest at PICA, EPALF elevates the voices of Portland’s artists of color. Through main stage performances, interactive workshops, an epic book & craft fair, kid-friendly activities, and more, EPALF will explore themes of healing, health, and wellness in alignment with this year’s MicCheck! series. All are welcome to this eastside festival boasting the quirkiest acronym around — for the record, it’s pronounced ee-palf — and get ready for a full weekend celebrating artists of color in our community! Suggested donation is $5, and no one will be turned away from lack of funds. RSVP at bit.ly/epalf18rsvp and share the Facebook event at bit.ly/epalf18.

This event is part of MicCheck!, a summer cultural event series organized by the Arts & Media Project (AMP) at the Asian Pacific American Network of Oregon. MicCheck! utilizes the arts to illuminate pressing issues affecting Asians and Pacific Islanders and multiracial communities of color. Visit www.apano.org/mic-check to learn more.

EPALF is no ordinary arts festival. The festival with the quirkiest acronym around has big goals to shift narratives, representation, and access to arts and culture in Portland. EPALF strives to: