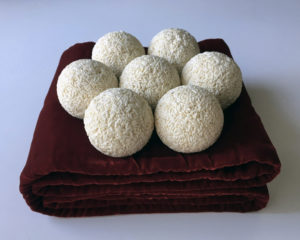 My work included in Descendent Threads is rooted in a reverent response to the mysteries that were always part of having a lovely Chinese mom. Watching her use her elegant and enigmatic tool for counting inspired wonderment. For ABACUS, I cast seemingly countless grains of rice into oversized bead forms. But instead of aligning on a rod, they are arranged like a blossom that rests upon a coiling velvet cushion. 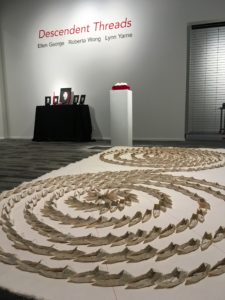 My mom spoke a language I could not understand, but in which she seemed her most buoyant while speaking. In making TRANSLATION, I have taken apart a Chinese-English dictionary. Using a pattern she taught me as a child, I’ve folded each page into a small boat. These 400 boats follow each other in a double spiral, out and in, across hand-drawn lines. 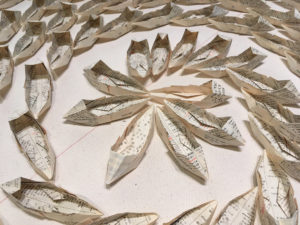 These red lines are the battens of a sail, latitude/longitude lines, or the lines on the pages of a calligraphy practice book. 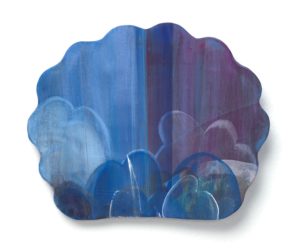 In the surfaces of my FAN SUITE paintings I see the influence of my mother’s Chinese “dreamstones.” As a child I was transfixed by these thin slices of stone, mounted in carved hardwood frames and revealing inclusions and veining that resembled landscape. 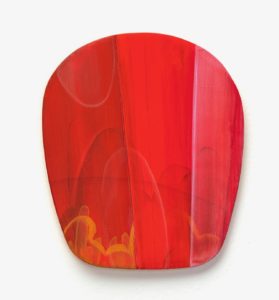 I am fortunate to have with me now, many treasures my mom was able to bring with her to America, and that I grew up with, including her fans. The shapes I use in the on-going painting series I call FAN SUITE are based on 17th, 18th and 19th century Chinese fans. There is the tradition of these fans to depict flora and landscape, suggesting that their restorative breeze could transport us to these lovely fresh scented locations.

My great-grandfather was Rev Chan Hon Fan. As a young man he was a missionary working with the Chinese Methodist Episcopal Society along the Pacific Coast from Puget Sound to the San Francisco Bay Area,1870-1900. The Oregon Historical Society has documented a letter written by him and published in the Oregonian in 1886. It was printed in his exact words, and titled A Chinaman’s Letter. 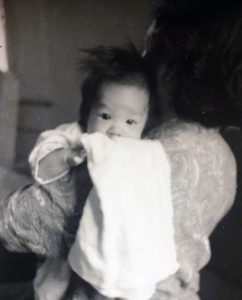 Me in my mom’s arms

Chan Hon Fan was living and working in Portland, OR, when his daughters, my great-aunt Clara Elizabeth Chan Lee (b.1886) and my grandmother, Laura Chan Chu (b.1885), were born. As a young woman my grandmother married and joined my grandfather in his return to China. They were living in Hong Kong when my mother was born. My mom’s childhood and education were in Guangzhou and Hong Kong. She was a physician working in Guangzhou when, as she put it, “the communists walked in.” Within a few months she defected to Hong Kong, eventually making her way to Texas. I was born on Galveston Island, and I am an American-born first generation Chinese artist.

Growing up in the 1960’s, in that particular Gulf Coast community, my family was a rarity; there were no other Chinese families. I was fortunate for regular trips to Los Angeles and San Francisco, visiting grandparents, aunts, uncles and cousins living there. Those Chinatowns were my first experiences of immersion in Chinese community.

In the 1990’s, I came to live in the Pacific Northwest with my own young family. Right away, I joined for a short while, a cooperative artists gallery that was located just across the street from where Portland Chinatown Museum is now. It was then I first learned from my mom that my Grandma Chu and Aunt Clara were born in Portland. What a welcome revelation to know I had such deep, personal connection, reaching far back in time, to my new home! I eventually would learn more family stories. So many were tales of displacement, running, assault, more running, loss of every kind…but always enormous resilience and service to others.

Horatio Law and Roberta Wong are among the first artists in Portland I came to know; I was captivated by one of Horatio’s early multi-media installations in the Motelhaus Portland project, 1998. A few years later Roberta curated my solo exhibit during Asian Pacific American Heritage Month at Interstate Firehouse Cultural Center. I recently had the honor to be included by Lynn Yarne in her video presented at Open Signal, Portland, “Don’t Forget Who You Are Or Where You Are From.” I am deeply grateful for connection to these artists through our exhibit together at Portland Chinatown Museum.

My mom passed away as we were installing our exhibit, Descendent Threads, and this timely coincidence has deepened a sense of longing to belong. I cannot forget her treasured objects and stories. Through the work I have developed for this exhibit I bring them forward with me into the future. 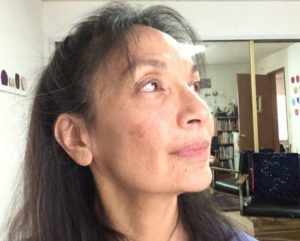 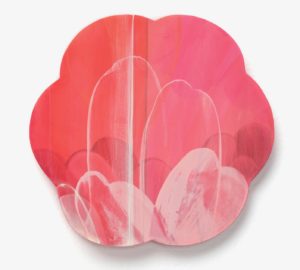 Ellen is represented by PDX CONTEMPORARY ART, Portland, Oregon. She will have a solo exhibit there in May 2019.