My grandfather was a poor rural farmer during the height of Maoist Communist China – he died not too far from where he raised his four children. His youngest son, my dad, left for college in Beijing at age 16, after testing amongst the best in his Province. The first of his family to leave town and attend college, he became a physicist and fighter jet engineer, working in a country in which I, as a second child, could never have been born.

The American chapter of my family began a quarter century ago. My father moved to Huntsville, Alabama in the early 1990’s to pursue a master’s degree in the United States. My parents credit the massacres at Tiananmen Square as the moment they decided to leave. They had watched as all seven of my father’s college roommates had emigrated across the Pacific. My dad was the last one to join them. My mom was more skeptical about leaving China and her family; it was my father’s dream and not hers. But I think she knew that promise awaited in the States, so she followed him with my then 4-year-old sister one year later. My mom was a pioneer in her own right. The daughter of a community physician and an engineer, my army brat mother would raise two kids and complete an additional engineering degree at South Puget Sound Community College to prove her U.S. credentials’ acumen, finishing at the top of her class. She went on to work a successful career as an immigrant, English-as-a-second-language, woman-of-color software engineer. She spent over eleven years of that career at Intel.

Although I appreciated my parents’ boldness in coming to the U.S., I didn’t always want this skin I was born into. Being told that your home smells funny, that your eyes are too small and slanty, that your English is pretty good for a chink, that your family should “go back to where they came from,” that there’s no way you know anything about American sports because you’re Asian, that you’re too different to be equal – those things hurt. You internalize so many of those words, the shame of growing up different in Portland – you learn to operate as a second-class citizen. You accept that who you are and where you come from is a flaw, not a feature, not something you should widely broadcast or ever fully embrace. My experiences growing up taught me that being Chinese was less than desirable. I don’t think I fully owned this Chinese part of myself until I left home for school in Chicago. I realized I didn’t want to leave behind the legacy my parents gave me, the Chinese upbringing that they gifted me. I cry with anger when I think about all the times I wanted to reject the culture that my parents reluctantly left behind, the customs that they held onto to remind themselves of who they are and where they came from. 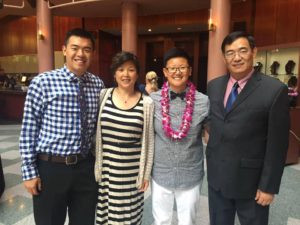 Robin, his mother, sister Cissey, and his father at Cissey’s doctorate graduation

My parents now tell me how proud they are of me for following my true passions for politics and social justice, even when they themselves had initially opposed and disagreed with my choice. But the truth is, I haven’t always overcome the naysayers or been comfortable with who I am. But my parents have shown me throughout my life what it means to hold true to who you are – that there need not be a trade-off between being American and being Chinese, of being who you are and who you want to be. My parents are the most progressive people I know — packing up their life mid-career to move to a faraway place with a completely different culture, embracing the unknown and people the likes of which they had never seen before. I want to tell them every day how much I love them and respect them for all they have done in their incredible lives.

I wish, when I was growing up, I had known someone who had once felt some of my insecurities who could have mentored and guided me. Someone who had figured out how to exist in this third world, caught between the two worlds of not being “American” enough to feel comfortable and not being Chinese enough to feel authentic. I wish I had had someone in my life who understood the devastating racism and xenophobia that exists in our world and how to not let it wreck you – to be proud of what makes you different, to bring your whole self to this world. I wish someone had looked into my small, black, slanted eyes and told me that everyone is a little different and the world wouldn’t be as beautiful without all of us in it. My biggest regret is not exploring the Chinese part of me more fully. I cringe at the thought I might have signaled to my loving parents that I was anything less than proud of the Chinese heritage they bestowed upon me. I regret ever desiring to be white, to be anything other than who I am. After the last election, my fear was heightened that Chinese children would grow up in America thinking they were unimportant, unworthy, lesser – that they didn’t belong. That they believed they had to surrender something about themselves for acceptance from others that they could never truly gain. I want to do everything I can to tell them that that is not the case. That they are special. That the only persons they ever need to convince are themselves. 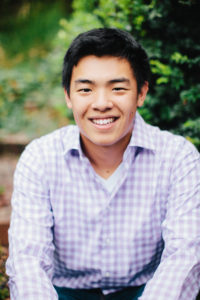 Bio: Robin Ye currently works a Field Organizer at the Asian Pacific American Network of Oregon (APANO), helping to build political power for Asians and Pacific Islanders through policy advocacy and community organizing. He is Chinese-American and the only member of his entire family born in the United States. Robin grew up in Beaverton, Oregon, graduated from the International School of Beaverton before moving to Chicago to study Public Policy and Human Rights at the University of Chicago. He is also a proud member of the APAICS family (Asian Pacific American Institute for Congressional Studies).