From My Desk: Part 2, The Photograph

They say that a picture is worth a thousand words, but when I look at this image taken May 13, 1942, there are no words to adequately express my emotions.

Two months after Pearl Harbor, President Roosevelt succumbed to intense pressure from Federal officials and issued Executive Order 9066. It called for all American citizens of Japanese descent as well as resident aliens from Japan to be removed from their homes and relocated in remote and secure camps for the remainder of WWII.

In the County of Hood River as well as many rural agricultural communities along the west coast, this meant that local farmers of Japanese descent would be forced to abandon their farms and orchards to comply with the order. According to an article by the Densho Encylopedia, Hood River Incident, “Nikkei farms contributed 25 percent of the valley’s production, even though they comprised less than ½ percent of the population.”

Farmers and families began the tedious and unsettling task of packing their belongings and trying to find sympathetic neighbors or friends who would manage and watch over their homes, belongings, animals and farms in their absence. How long would they be gone? When would they be allowed to return – if ever?

In conversations with some of the older Japanese American members of the community, I wondered what they took with them. How did they determine what they would need, not knowing where they were going or what their living conditions might be? Some of the women said they chose to look after their family’s needs first, since they were limited to one suitcase and a duffel bag. Medicines for the elderly and basic needs for the babies and children took priority over non-essential luxury items. Multiple layers of clothing worn on the day of departure left more room in the bags for other needs. There was no room for books, family photographs or sentimental trinkets. These were all left behind in carefully numbered and stacked boxes located in back rooms and barns.

I can feel the emotions of the day. Uncertainty. Sadness. Disbelief. Anger … maybe, but definitely fear. Lines of people saying good-bye. Some to watch and shake their head in disbelief and some to stand in line and wonder why. 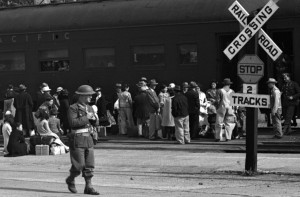 See the women and children heavy laden with suitcases and heavy hearts. Look at their faces. These are the faces of people who came to this country to live a better life. To raise their children in the American Dream while still honoring the culture of their homeland. These are the faces of Americans being incarcerated against their will to appease a war they had nothing to do with.

The line moves forward now. Each family taking their place in a car while the windows are covered and the lights turned off. Moving away from the depot, the wheels begin the clickety-clackety sound that with each turn takes them further away from the homes they love. Taking them towards an unknown future. After “processing” at the Portland Fairgrounds, many would be taken to Tule Lake, California. Some to Minidoka, Idaho. Some would eventually return to the Hood River Valley after the war. Some would never return.

I hope your heart breaks like mine when I look at this photograph. Remember the faces and do not forget.

A special thank you to The History Museum of Hood River County for allowing me to share these photographs with you. Check out the museum’s historical photoblog.

Bio: Connie Nice worked for fifteen years as Office Assistant turned Museum Director at The History Museum of Hood River County. She is now retired, enjoying time with her family and working as a writer, consultant and motivational speaker. She has published the book, Hood River (Images of America). You can read more of Connie’s thoughts about life, faith, travel and family on her blog.