Thank you to one of our Anthology’s authors, Simon Tam, for sharing the following blog post.

It should be noted that the endeavor itself isn’t “White History Month,” (which would imply the celebration and accomplishments of white individuals, but rather Whiteness, which directly refers to the social construction of white supremacist culture. Those four little letters provide an important distinction that has been lost as a number of online media outlets unleashed unabashed knee-jerk fury, accusing the school of “white shaming.”

The deep irony, of course, is that PCC (as well as many universities around the nation) have been discussing whiteness as an academic subject for years. The messaging from anti-racist speakers, the establishment of multicultural resource centers, the recruitment of diversity and inclusion staff hasn’t changed – and those efforts reflect the spirit of Whiteness History Month. Yet, the same angry mob has been relatively silent throughout those numerous activities.

Why does indignation only occur for a dedicated month when classes on white supremacy and critical race theory are held all year long? Those same angry individuals will tell you it is the content, despite the fact that the content and activities haven’t even been announced yet.

I think it’s important to take a step back and re-frame the conversation. When questioned, none of the angry callers will say their fury is rooted in the idea of a month. In fact, most are upset because they want to “take America back.” They genuinely believe our country has gotten too sensitive, that there is a culture of reverse-racism, and that racism remains only a problem because people keep talking about it instead of letting it die in the past. Some will even proclaim that they themselves are not racist, they just feel whites are constantly being guilt-tripped for events of the past.

In their minds, talking about racism perpetuates the problem. However, we would never try to solve hunger by refusing to talk about the issue. Cancer will not be cured through ignorance. Homelessness is not eradicated when we only focus conversations around homeowners. Like any other major social problem, we need to tackle this by acknowledging its existence, addressing the symptoms, and focusing on the root cause.

But complaining about a school that is holding Whiteness History Month? That’s just racism talking. The same racism, with the exact same messaging that got us into this mess to begin with. It’s time for racism to shut up and for someone else to step up and take the mic. 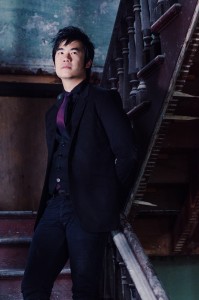 Simon is the founder and bassist of The Slants, the world’s first and only all-Asian American dance rock band. His approach to activism through the arts has been highlighted in thousands of media features across 82 countries, including: BBC World News, NPR, TIME Magazine, NBC, and the New York Times.

Since 2000, he has been a performer, presenter, and keynote at events and organizations such as TEDx, SXSW, Comic-Con, The Department of Defense, Stanford University, Harvard University, and over 1,200 others across North America, Europe, and Asia. He has appeared on the TEDx stage 9 times.

Recently, Simon was named a “Portland Rising Star” from the Light a Fire Awards, received a “Distinguished Alum Award” from Marylhurst University, and was twice nominated for Portland Business Journal‘s “40 Under 40” List.

He is currently serving as a founding member on the board of directors for the Oregon Center for Human Rights, serves on the board of Know Your City, is a community representative on the Cultural Resource Centers Advisory Council for Portland State University, and is a member of the Policy and Equity Committee for the Jade District, The Office of Neighborhood Involvement Bureau Advisory Committee, and numerous committees for the Asian Pacific American Network of Oregon.

You can find Simon’s appearances, writing, and current projects at: www.simontam.org