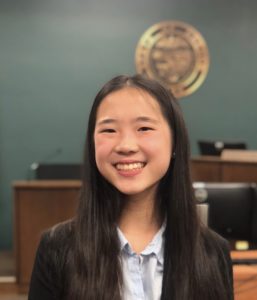 Bio:  Summer Tan is a high school sophomore who lives in West Linn. She enjoys mock trial, and her team won first place in the 2020 Oregon State Championship. She loves competing in debate tournaments, participating in Model United Nations, and playing golf with the high school team. She is also currently Vice-Chair of the City of West Linn Youth Advisory Council and has volunteered for various non-profit organizations with the National Charity League.

I have lived in the Portland area my entire life. As such, I have been privileged in how I have had, for the most part, nothing but positivity directed towards the subject of my race. In fact, on that day in late January when a stranger accosted me at the mall, I’d been commenting how happy I was to see Chinese New Year decorations everywhere.

“Are you worried about the coronavirus?” this woman asked, out of nowhere in the middle of a store in Washington Square Mall. Was I what? Confused, I had tried to get out of her way. I’d panicked for a few seconds as I tried to identify her, even as I responded that, no, I wasn’t worried about the coronavirus — as far as I knew, there had been no cases in Oregon. “Oh,” she’d responded, almost disappointed. “I was just wondering because your people are spreading it everywhere.” I wish I had asked, “What do you mean, ‘your people’?” I wish I could have gathered myself enough to ask her what could have possibly possessed her to walk up to a girl distracted by shiny bracelets and accuse “her people” of spreading some disease. Selfishly, I wish I had made a scene.

I did none of those things. Instead, I’d looked at her, smiled, and replied, “Well, there have been no cases in Oregon,” and then fake-coughed, making only superficial efforts to cover the cough as she cringed away from me. While I felt some satisfaction from her discomfort, I still mostly felt like crying as I walked back to my friends.

I wonder, now, if she even realized that what she’d done — what she’d said — was wrong. After all, if she had been bold enough to approach a 15-year-old with a baby face and accuse “my people” of “spreading around” a virus, who could say what else she was willing to accuse other people of? Maybe she had thought that her comments were a lead-up to appropriate conversations, though I cannot imagine any circumstance where those comments were appropriate. Maybe she had been intentionally rude. Maybe she just didn’t think, and spent the rest of the day regretting her words, even as I tried to forget she’d said them.

I knew that I’d done nothing wrong — and yet, I felt “dirty” throughout the rest of the day, carrying around the baggage of her words as if something was undeniably my fault. Besides those two minutes of my life, nothing eventful happened at the mall that day.

Here’s the thing: I know that there has been much fear over the coronavirus pandemic. The event at the mall, as well as reading accounts of increased racism towards Asians, however, have made me realize that, while fear of a deadly disease is understandable, those fears have allowed people to abandon civility in favor of stark racism and xenophobia.

Perhaps I was naive in not considering that people would turn against each other in fear and that their fear would bring out the worst versions of themselves. I still believe, though, that we ought to try harder to not let this fear cripple ourselves or our empathy. As Oregon schools close, events are cancelled, and people self-quarantine, we must choose kindness. We owe it to each other to try.

Summer’s essay was originally printed on March 16, 2020 in the WestLinnTidings, published by the Pamplin Media Group.

Oregon Public Broadcasting followed up with Summer on their Think Out Loud program. You may listen to it here, if interested. 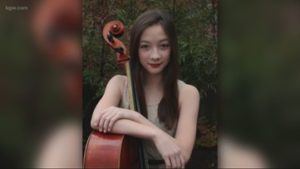 Kira Wang of Portland is one of 24 cellists acknowledging difficult times but giving hope through ‘The Swan Project.’