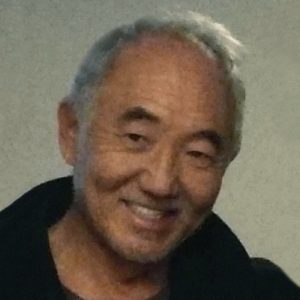 Growing up Asian American, I have seen and felt the effects of being looked upon as “different.” But rarely have I felt excluded. I grew up in San Francisco and my public schools were a mix of all races. So were my friends. A lot of second and third generation Chinese, Jews, Hispanics, Blacks, Whites, you name it, attended my schools. Well-integrated. Name-calling among kids was commonplace back then. For the most part, I was unfazed. Political correctness was not in our social consciousness yet. “You lost the war!” What? I’m 10. I wasn’t even in the war. “Chinaman!” I’m not even Chinese. The intended insults didn’t really bother me. Maybe because I knew they were just assholes. Not to mention, I’ve always been a firm believer in the laws of karma. The Japanese call it bachi.

For some reason, it was the tamer “ignorant stereotyping” comments that bothered me more. “You must be good at math.” “What does your family eat for dinner?” “How do you say this in Japanese?” How the hell do I know? Here’s a good one: “Oh, you’re Japanese. Do you know the Yamashita family?” Hmm, I don’t know. Where do they live? “In Idaho.” Ugh. Does bachi apply here? Please say yes. 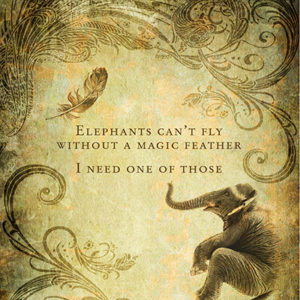 Illustrated Haiku:
Elephants can’t fly
without a magic feather.
I need one of those.

When I was twenty, I moved to Los Angeles where I remain today. Being an artist, I tend to look artsy, so I’ve been told. I don’t think anyone has ever thought that I was an accountant. I haven’t tried to break any stereotypes, but I think, by nature, I have. That thought gives me a sense of pleasure. If people can judge others by who they are rather than what their ancestry is, the world would be a better place. I knew I wanted to be recognized as an accomplished graphic designer and artist, because that’s how I saw myself. I neither embraced nor dismissed my heritage. It was a non-factor.

I began my career as an art director for Young & Rubicam in a high rise on Wilshire Blvd. At 20-years-old, I had no idea what I was doing, so I was subsequently fired after just three years. Then I had the good fortune of creating movie posters for the film industry. We’re talking about a business dominated by Jews and gentiles. At that time, there were very few Asian minorities involved in movie marketing in the film studios or elsewhere. My graphic design boutique thrived despite this glaring deficiency. In fact, almost forty years later, I am still busy whereas all my contemporaries have fallen by the wayside. Why? I never saw my Asian-ness as a determining factor. I put my faith in my talent and passion and hoped others would, too. I have always believed that people should be judged from the inside out because that’s how I always want to be judged.

Illustrated Haiku:
It’s hard to believe
that miracles can happen.
And yet, here we are.

I ended up marrying a Hispanic girl and had two hapa kids. I wasn’t trying to marry out of my race. It just happened that way. I still have many Asian American friends, many who I grew up with in San Francisco, but the commonality isn’t our ancestry, it’s everything else: sports, work, family, our interests. Most of my friends in LA are not AAs. Again, it’s not a conscious decision. It just happened that way.

Some think ignorant stereotyping is harmless. But, it can create a stigma that unconsciously influences others, including AAs. It bothers me that Asian American men are still sometimes looked upon as little, geeky gardeners or discreet coroners with thick glasses. We’re not all Bruce Lee, and we’re definitely not how the media often portrays us. The media, TV shows and movies can do a lot to change this perception. I see minor strides, but I don’t see it happening with enough regularity to make a measurable difference. 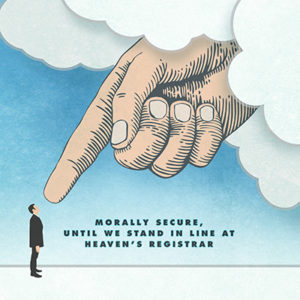 Illustrated Haiku:
Morally secure
until we stand in line at
Heaven’s registrar.

An example: I was in my mid-twenties when a girlfriend, her uncle and I went to dinner at Benihana, a Japanese restaurant on La Cienega. We were up front waiting for a table when a white family strutted in. I remember the dad had a boyish expression of glee on his face, as if Japanese cuisine would be a novel treat for his family and he couldn’t wait to tell the Yamashitas all about it when they got back to Idaho. He waltzed right up to me and said, “Smith, party of five!” Keep in mind, I was wearing jeans and a T-shirt and looked nothing like someone who might be a host at this posh restaurant. There was an awkward moment as my girlfriend and her uncle turned their heads to me in disbelief. Rather than explain to him that I didn’t work there, I went up to the reservation list at the podium and saw that his “Smith, party of five” was indeed on it. So I then walked them deep into the restaurant, found a table, sat them and said a waiter would be with them shortly. When I went back to join my friends, they were practically rolling on the floor.

Another time, I was waiting curbside for a valet to fetch my car when a car pulls up. The driver gets out and hands me his keys. Rather than steal his car, I explained that I wasn’t the valet. 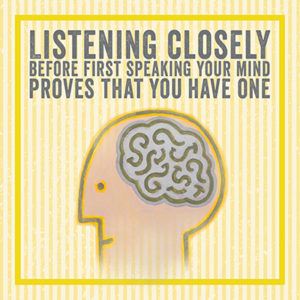 Illustrated Haiku:
Listening closely
before first speaking your mind
proves that you have one.

One more: I was once hired as a freelance art director to work on the Kleenex account in Kansas City, Missouri for a day. The agency had arranged a big dinner party to welcome me. Mid-western hospitality. At dinner, I mostly sat quietly listening to what they all had to say before I pitched my thoughts. As we were all getting up to leave, a woman came up to me with an astonished look and said I spoke English very well. So how do you respond to that? I know it was an intended compliment, but seriously, do you call her out on her ignorance or let it slide?

Are people guilty of negative stereotyping if they don’t even know that they are? Ok, it may not be blatant bigotry, but it still sucks. Which brings me back to my original question. How harmful is ignorant stereotyping? Sometimes it’s merely an annoyance, like someone cutting you off on the freeway, but it is always an injustice to the person being stereotyped because we don’t see the real person underneath the stereotype. I’d like to see all of us being empowered to be our unique selves and not categorized into our stereotyped selves. 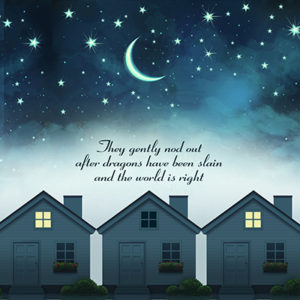 Illustrated Haiku:
They gently nod out
after dragons have been slain
and the world is right.

Bio: Mark Matsuno is the owner of Matsuno Design, Inc., a graphic design studio located in Glendale, CA, and works mostly for the film industry. Mark is also a fine artist. You can see his work at markmatsuno.com. He was born and raised a sansei in San Francisco and currently lives in Glendale, CA. Mark says, “I have created posters for high visibility movies such as Mississippi Burning, High Fidelity and Dances with Wolves, but also suspiciously chosen for films such as Crouching Tiger, Hidden Dragon and Come See The Paradise.”

Mark was also recently invited to showcase his illustrated haiku (a few examples of these have been added to this post for your viewing pleasure) at a silent auction fundraiser for Haven Hills, a charity for victims of domestic violence. He was one of about a dozen artists there and his entire display sold, raising much needed resources for Haven Hills.