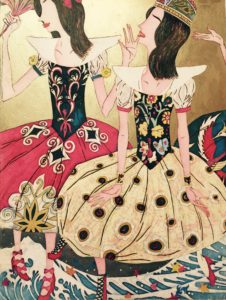 Odori
2016, Intaglio, Chine Collé, and Hand-colored
The figures are dressed western style and have tiaras on their heads.
The bottom of the image has Hokusai ukiyo-e style waves.

I was raised in Japan among a mixture of eastern and western influences. For example, Japanese gardens are cultivated high atop thirty-story Western skyscrapers and people dine at a McDonald’s fast food restaurant or sip a cup of coffee at Starbucks while watching Sumo wrestling. Japan is a land of contrasts. On the surface it might appear that the culture of Japan has taken on thoroughly American and European characteristics, but behind this Western façade, Japan’s ancient and traditional philosophies have survived.

In my work, I explore this co-existence of eastern and western influences. My images bear a slight resemblance to traditional Japanese Ukiyo-e prints (which were frequently decorative, brightly-colored and featured highly-stylized exaggerated and distorted figures) while also expressing contemporary aspects of the western world. 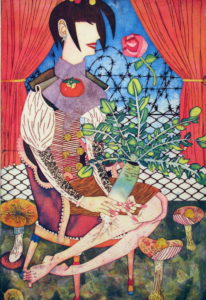 Although my artwork is mainly considered representational, I deal with more metaphorical aspects rather than realistic physical evidence. The human body along with other elements – fruits, vegetables, furniture, animals, etc. – have been my most recent focus. The enigmatic figures I draw are reflections of the human conditions that people often find themselves in their daily lives: wryness, satire, whimsy, irony, paradox or mismatch. My figures also employ a state of motion or movement suggesting an actor/actress who narrates a story in a play.

Most of my work is created by the intaglio printmaking process. This involves etching, drypoint, softground and roulette on a copper plate. I use a four-color printing process (black, yellow, red and blue in order) on a thin Japanese Kozo (Mulberry) paper. As in the French use of the technique of “Chine Collé,” I apply glue to the back of the completed work and pass it through the press with a heavier rag paper beneath.

The small transitions in my work from time to time are based on the unpredictable texture that is printed from the etched surface of the copper plate. My prints explore the complex relationship of paper, ink and etched plates to describe my thoughts, as well as the relationship which occurs between figures and space to express human experiences. I try to always investigate the maximum potential available to me as a printmaker to bridge eastern and western expressions. 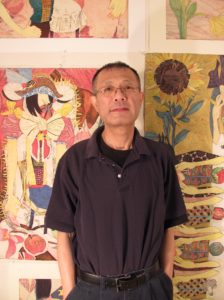 Hiratsuka has received numerous international awards. Since 2010 he has had 13 solo shows in the US, as well as in Korea, Canada and Northern Ireland. Some of the public collections that include Hiratsuka’s art are The British Museum, Tokyo Central Museum, Panstwowe Museum in Poland, The House of Humor and Satire in Bulgaria, Cincinnati Art Museum, Cleveland Art Museum, Portland Art Museum, New York Public Library, The Library of Congress and The Smithsonian’s Museum of Asian Art.

See other images of his artwork here. 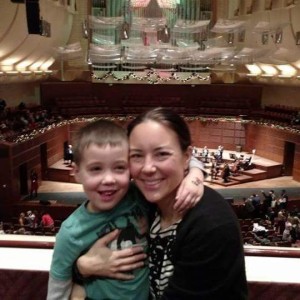 My grandparents kept a copy of Japanese Children’s Favorite Stories in their living room bookcase. As a young child, I read that book countless times curled up in their recliner as my grandmother cooked dinner or my grandfather watched his afternoon baseball game. Sometimes my grandparents told me versions of the Japanese stories that they had learned as children, and often that led into other stories about their own lives. When I got older, we had a copy of this book in our own home. Over the years, I would pull it out to read now and again. I liked the stories themselves, but what I really loved was being brought back to those summer days with my grandparents – some of the happiest moments of my childhood.

Years later as an adult, I picked up a book called Tori and the Origami Box while visiting Talk Story Bookstore in Hanapepe, Kauai, just down the road from my grandparent’s old house. Tori is a young girl in Hawaii growing up with her Japanese Obaasan (grandmother). Tori spends every afternoon learning from her Obaasan and developing a special bond with her. After my son Ben was born, my mother visited us often, and she and I read this book to him, along with the numerous other books we had in our home library about grandparents and grandchildren.

By the time Ben was a year old, he kept crawling over to the bookshelf and choosing this book, especially when my mother was out of town. When Ben began to talk, he opened the book and pointed to Tori’s Obaasan and said, “Baba,” and smiled. The next time my mother returned for a visit, he looked at her and said, “Baba.” Ben and his two younger sisters all now refer to my mom as “Baba.” And even now that he’s almost six, Ben still likes to take out Tori and the Origami Box. I know it brings him comfort just as reading those Japanese Children’s Favorite Stories still does for me.

The connection Ben sensed so early on between the Obaasan in Tori and the Origami Box and his own grandmother made me more cognizant of the need to find books that feature characters that look like our family. I am always particularly on the look out for books that emphasize the special relationship between grandparents and grandchildren and the importance of sharing our lives and passing on our stories from one generation to the next. Some of the books we’ve enjoyed include:

Yoko’s Paper Cranes by Rosemary Wells – Yoko is a young cat who moves from Japan to the United States and faces the challenges of balancing her old culture with her new. Yoko misses her Obaasan and Ojiisan back in Japan and decides to fold paper cranes to help celebrate and remember her peaceful times with them. This is part of a series of books.

Grandfather’s Journey by Allen Say – this book tells the story of the author’s grandfather’s journey to the United States from Japan and his lifelong desire to be in both places at once. Say has numerous books written for children that address the complex history and realities of immigration and the feeling of living between two worlds. Other books we have enjoyed by Say include Tea with Milk, Kamishibai Man, Music for Alice, and The Boy in the Garden.

Suki’s Kimono by Chieri Uegaki – Suki spends her summer with her grandmother who presents her with the gift of a kimono. When Suki returns to school in the fall, she wears her kimono and shares with her classmates stories of the Obon festival.

A Place Where Sunflowers Grow by Amy Lee-Tai – there are countless children’s books that tell the story of Japanese Incarceration. In this book, the author tells the story of her grandmother, Mari, who was interned at Topaz and found a way to discover beauty in her harsh conditions. I appreciate the message of hope in seemingly hopeless situations and the power of pride and attitude. Other books on this topic that we’ve shared include Baseball Saved Us, So Far From the Sea, and Fish for Jimmy.

Author Bio: Anne Hawkins is a criminal defense attorney in San Francisco, California. She is the daughter of a third-generation Japanese-American mother and a fifth-generation Irish-English-American father. She lives in the Bay Area with her husband and three children. This year, she was thrilled when her son’s preschool teacher read Grace Lin’s Where the Mountain Meets the Moon to his class. Her favorite authors include Amy Tan, Kazuo Ishiguro, Haruki Murakami, and Gail Tsukiyama. Recommendations welcome: annehawk@yahoo.com.